In an Easterly Parkway Elementary room, Amy Lawrence and her student are turning story time into a different kind of hands-on learning.

“What’s the mama monkey doing?” Lawrence says, her hands repeating her inquiry with fluent signing. “Is she taking a nap?”

The hearing-impaired girl signs her response from her wheelchair. Because she has multiple disabilities, she’s learning how to sign, and her movements are less precise. Seated across a table from her, Lawrence leans forward and holds the girl’s hands, guiding them to the right words for this ASL lesson.

“You want your book,” Lawrence says and signs when choosing the next activity. “You have to ask for it. Say, ‘Book, please.’ ”

And that keeps Lawrence hopping. A normal day could see her travelling across the district to work with six students in five buildings. Overall this year, she’s helping 18 students from elementary to high school as part of their special education support teams.

As her settings change, so do her roles.

She might go from teaching ASL at one meeting to “pre-teaching” and “re-teaching” coursework at another. Before leaving for home, she might have provided college advice for a hearing-impaired sophomore as well as built basic language skills with a second-grader. In lieu of a district educational audiologist, she also could have ordered a new battery for an assisted listening device such as a Bluetooth microphone worn by a teacher that feeds directly to a student’s hearing aid.

Whatever the case, Lawrence remains first and foremost an advocate for her students. She wants them to thrive, to feel more adjusted and comfortable at school, to succeed there and in life. She’s in their corner, and there’s no other place she would rather be.

“I think the work that I’m able to do with students and their families and the teachers that they work with is important because no one understands what the impact of hearing loss can have on the educational placement as well as I do,” she said. 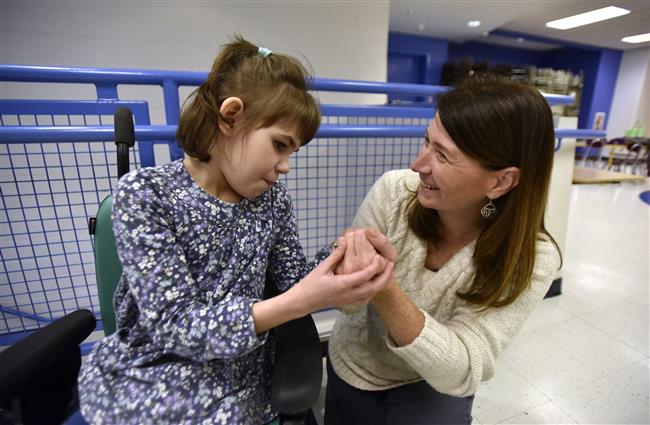 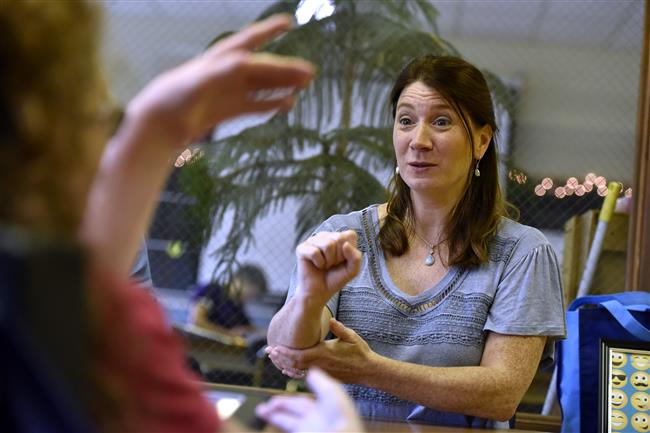 Signs of the future

A State High graduate who grew up in Park Forest, Lawrence delved into ASL while at Penn State.

Deaf family members or friends are a common inspiration for learning to sign, but she had neither — only an abiding curiosity about a silent foreign language.

“I was always fascinated by sign language, and I tried to learn it myself from a book,” she recalled. “When I got to Penn State, they offered ASL and I took three years of that.”

At the same time, she was majoring in elementary education and discovering mainstream students can be visually-impaired or deaf.

“The more I thought about mainstream and other placement options, like schools for the deaf and hard-of-hearing students, I was fascinated by how we teach these students,” she said. “I just called a couple of schools and went out and observed students in other placements, and I thought, ‘This is what I really want to do.’ ”

After graduation, she earned a master’s degree in deaf education from Gallaudet University, a specialized school for deaf and hard of hearing students in Washington, D.C., and then became a hearing support teacher with the Montgomery County Intermediate Unit.

Five years later, tired of criss-crossing four school districts, she moved back to State College and took an available general education position, a sixth-grade classroom at Park Forest Middle School. For 11 years, she enjoyed teaching middle school students. “It was a great age for me,” she said.

All the while, though, she kept up her ASL by teaching it in school as a weekly elective and to residents through community education. Freelance interpreting also helped prepare for her next chapter. In 2011, just as she began a family, a retirement opened up the hearing support position.

“It came at a good time,” she said. “After 11 years in the classroom, I was ready for another change.”

A voice for students

“That helps her in her role because she understands what those general ed teachers have to do when they have a classroom of 27 kids and, oh by the way, you also have this kid with a hearing loss for whom you have to make these kind of accommodations,” Salter said. “When she’s asking general ed teachers to consider making certain kinds of accommodations for her students, she understands from the teachers’ perspective what she’s asking them to do.”

In some cases, Lawrence might obtain a teacher’s slideshow or notes in advance because taking notes while speech-reading can be daunting. She’ll train teachers with assistive technology, or help them adjust lessons and activities, or educate them about children with unilateral hearing loss who have difficulty localizing sound and filtering out background noise with one normally functioning ear.

“You work with the teacher on helping them understand how important direct communication is, keeping the background noise down, calling on one child at a time,” Lawrence said. “Our whole school is set up for auditory learning, and it’s such a disadvantage for students with hearing loss.”

Helping others comprehend her students’ reality is a constant goal. She builds empathy by having parents and teachers wear earplugs during individualized education program (IEP) meetings to simulate hearing loss. To explain the learning challenges deaf or hearing-impaired students face in school, she often employs a laundry analogy.

Just as washed and folded clothes stack up in a bedroom when there’s not time to put them away, her students may not properly “store” information for recall. Processing comes at the expense of long-term memory.

“You want that one tank top that matches your outfit and you can’t find it because it’s not in the drawer you should have put it in,” Lawrence said. “It’s in the piles, and you have to spend so much time trying to find something because it’s not organized correctly. And that’s what happens a lot of times with my students with hearing loss.”

Her students, she has found, need the same explanation.

“Helping them understand that there’s no brain or learning disability,” she said. “It’s just the way they’re wired, and that they haven’t been given adequate time. So part of my job is to make sure we’re getting their brain organized so they can retrieve information, and then I set them up for success in that way.”

Sophomore Lauren Gaylor wears two hearing aids that compensate for mild to moderate loss. She wants to study photography in college. Since the fourth grade, she has worked with Lawrence, who advises her about courses and summer programs and serves as a confidante.

“I’ve found it really helpful that I have someone besides my parents to bounce ideas back and forth with and decide what I actually want to do with my life beyond high school and maybe even beyond college — my goals of being a better student and a better person,” Gaylor said. “I’m really thankful for that.”

Gaylor also appreciates becoming more organized and self-reliant, being pushed “in the right directions” toward independence. For Lawrence, her students’ well-being is paramount, whether she’s teaching ASL as a primary language or discussing social lessons that often elude students with hearing loss.

“So much of what we learn we learn from overhearing,” she said. “Think about the elementary level. A boy does something silly in line and the teacher goes over and scolds him. Everyone hears that, but my kids with hearing loss don’t. They might see him get scolded, but they don’t know what prompted that. There’s no context because they were paying attention to what was in front of them, not overhearing what was going on around them.”

Some days, her triumphs might include simply being a friend to someone anxious and struggling in a world apart. It’s all in a day’s work for a hearing support teacher who looks forward to becoming unnecessary.

“I think my greatest joy is seeing students graduate from hearing support, that they have the self-advocacy skills, that they’re using technology for hearing,” she said. “They’re using accommodations on their own, and they don’t need me any more.”

By Chris Rosenblum
Video and photos by Nabil K. Mark