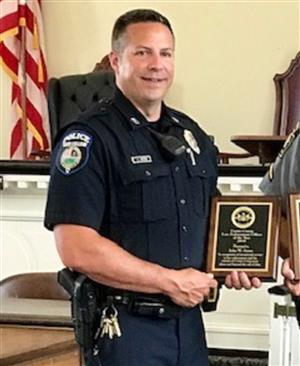 According to a release by the Centre County Government:

Detective John W. Aston has been a member of the State College Police Department since 1995 and a detective since 2003. Since 2011, Detective Aston has been qualified as an expert cellphone forensics and has assisted local, state and federal agencies in the downloading and analysis of information from cellphone and smart phones. In 2018, his analyses were instrumental in multiple cases that went to trial in Centre County. Those cases included the murder case of Commonwealth v. Danelle Geier; Commonwealth v. George Ishler; Commonwealth v. Ardell Gross. That analysis included recovering information that had been deleted; providing location information regarding suspects, witnesses and defendants; and proving the criminal conspiracies to commit these crimes. Detective Aston regularly made himself available to agencies outside State College and his attention to detail was instrumental in prosecuting these cases.

This award is given annually to officers whose commitment and hard work have been exceptional.