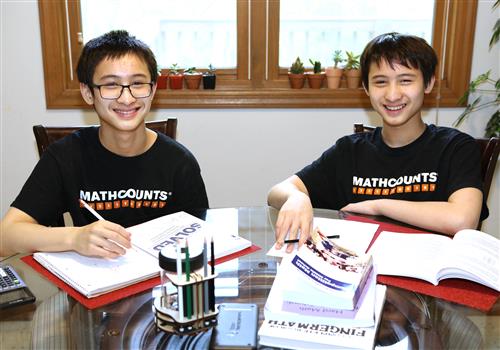 Aaron placed 20th overall, the highest ever national ranking for a SCASD student, with his brother an impressive 65th. The seventh-graders’ accomplishments came on the heels of finishing first and second, respectively, in the Pennsylvania State MathCounts Competition in March.

MathCounts is a competitive program that promotes mathematics achievement through fun and engaging contests. Pennsylvania has the second largest participation in the nation. This year’s state team, drawn from more than 270 schools and coached by Park Forest math teacher Rebekah Sjoberg, took 12th place nationally.

According to Sjoberg, also Park Forest’s coach, the previous best individual showing for a district student was 28th, first achieved in 2014 and again two years later.

“I am so proud to have coached Aaron and Aidan these past four years,” Sjoberg said. “Not only are they brilliant mathematicians, but they are also some of the hardest workers you will ever meet. They practice and train for Mathcounts as they would for a traditional sport, spending hours working each day. They also have kind and genuine personalities, always willing to help others and stay after practice to clean up the room. A special thank you goes to their father, Anh Giang, who, throughout the season, helped me to write and edit rich mathematical problems that benefited not only Aaron and Aidan, but also the entire SCASD Mathcounts program. I am thrilled that all their hard work propelled them to such outstanding ranks at Mathcounts states and nationals.”

The twins’ national performances capped their outstanding MathCounts season. Starting out with 55,000 middle school students nationwide, they advanced steadily to be among the 224 national qualifiers. For their final rankings, each won a $750 college scholarship and other prizes.

“I really enjoyed MathCounts, because it makes learning math fun, and it really lets students interact with people like them, the people who enjoy math,” Aaron said.

Aiden also enjoyed the year and raised the prospect that Park Forest’s formula of Le-squared might equal more of a force to be reckoned with in the fall.

“The competition was a great experience and it was nice to place that high,” he said. “MathCounts is a great learning experience and I hope to make it further next year.”