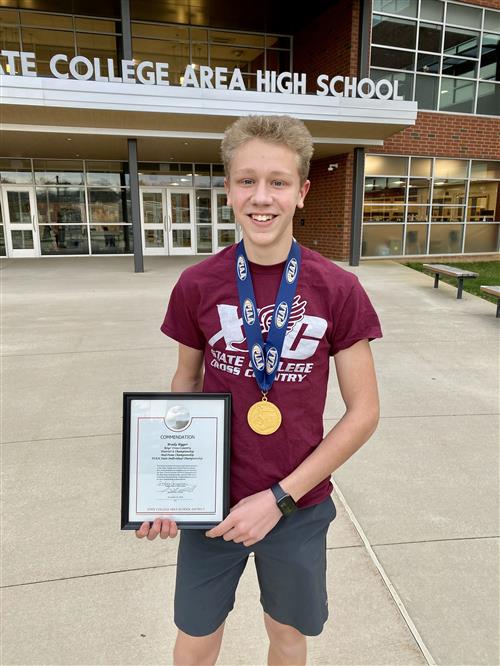 It’s fair to say Brady Bigger’s senior year has been a running success to remember.

Bigger was named the 2020-2021 Gatorade Pennsylvania Boys Cross Country Player of the Year, the first State High cross country runner to receive the award and only the second Gatorade player of the year in school history.

The lofty accolade capped two outstanding final seasons. In the fall, he won the state Class AAA cross country championship as well as the District 6 and Mid Penn titles, and this spring, he medaled in two events at the PIAA Track and Field Championships.

“What Brady Bigger has accomplished in his time at State High will forever rank among some of the top performances in boys cross country, as well as boys track and field,” said Assistant Athletic Director Loren Crispell. “On top of his remarkable prowess and success as a student athlete, Brady is a superb student in the classroom, and sets a magnificent standard when it comes to his work ethic. Humble, unassuming, and full of determination, Brady serves as an example of what all of us — young and old — can aspire to when pursuing the best version of ourselves.”

At State High, Bigger maintained a 4.55 weighted GPA, served as a peer tutor and assisted incoming freshman students as a school ambassador.

“Brady has grown to become a leader on and off the field of competition,” said State High cross country coach Dave Felice. “He’s an excellent role model for athletes everywhere.”

After graduation, Bigger plans to spend two years as a missionary before attending Brigham Young University in Provo, Utah, where he hopes to run cross country and track.

“Brady has been a fantastic ambassador for State High athletics, and we could not be more proud to call him a Little Lion,” Crispell said. “We wish him the very best of luck in his future endeavors, and look forward to celebrating his many achievements and great successes to come.”