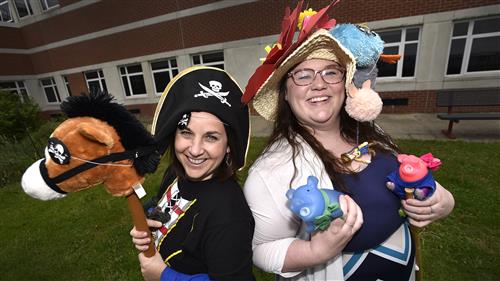 Most of the time, Heather Brewer goes through life as a Mount Nittany Middle School music teacher.

But on Monday mornings, she’s whoever she wants to be.

One week, she’s an Australian zoologist; another a French announcer. She easily transforms into a southern belle at the Kentucky Derby, an English matron or anything else her creative spirit conjures.

This spring, Brewer has drawn on her penchant for accents, acting chops and an innate zaniness to carry out a show business side gig. With stuffed animals, wacky hats, background projections and other no-budget props, she has teamed with literacy teacher Chelsea Cummins to anchor the school’s Monday Nittany News broadcasts, turning them into a madcap series popular with students and colleagues alike.

“It has been such a boost during a tough time for everyone,” French teacher Kristina Helmerich says. “They have done so much to lift us up.”

As the Nittany News co-advisor, Helmerich deserves the credit — or blame, depending on your perspective — for unleashing a comic juggernaut. Back in March, she enlisted Brewer to fill the anchor spot for one morning, read aloud the birthdays and menus, that sort of thing.

“And of course, I couldn’t say them normally,” recalls Brewer. “I had to wear a fake mustache and have a news anchor accent, just to spice it up.”

Reviews for the debut that included a honking rubber chicken were glowing, so she stayed on. Her second episode starred Quarantina, a pink llama refusing to say her lines, leading her dismayed Aussie co-anchor to resort to hasty ventriloquism.

From its humble start, the series has grown more elaborate, if not highbrow. Currently, it features a running gag — literally, sometimes — between Brewer and her partner in crime. Introduced as a pirate in the fourth broadcast, Cummins has been pursuing Brewer, who is disguising her true identity, a grown-up Darla from Finding Nemo, while on the lam for fish abuse charges. Their “chase” led to a slapstick Derby recreation worthy of the Marx Brothers.

“I have always been involved in drama,” Brewer says. “I did musicals and plays growing up, so I love doing this creative stuff. We’re having so much fun, so I’m happy to do it. It’s never a chore.”

Seven episodes in, including blooper reels, the dynamic duo knew their antics had struck a chord with a fan base raised on smartphone videos and TikTok. Students routinely suggest skit ideas, and have been inspired to adopt their own routines when anchoring other morning announcements. That’s gratifying to Brewer, who has found that goofy humor can help engage hesitant students.

“It’s just part of my personality to be open and bold and funny,” she says. “I find when I do that, students who aren’t participating in class feel comfortable to do so because they see me messing up and being goofy and they think, ‘I’m allowed to just put myself out there too.’ ”

As Chelsea the Pirate would have you know, perhaps as revenge, the blustery Parisian with the migrating mustache or the haughty aristocrat waving a stuffed sloth’s arms for emphasis aren’t far removed from her friend’s true self.

“This is how she teaches all of her classes,” Cummins says. “She’s always got accents and animals. They all have crazy names. I mean, this is Heather Brewer in a nutshell. We rely heavily on her to jazz up this place.” 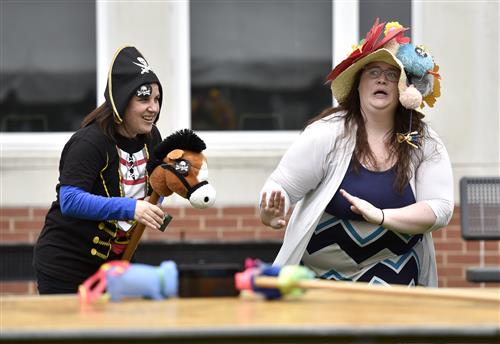 All the fun, however, has come with a price: raised expectations. What’s next? Will Brewer evade her nemesis as a Scottish bagpiper? A Swedish chef? Or will they both simply collapse in exhaustion?