With a dramatic whoosh, all of Tori Sodeinde’s work disappeared from view.

But that’s exactly what the State High senior wanted — the swift launch of her 4-foot rocket to cap her time in the Rockets for Inclusive Science Education (RISE) program’s debut.

During the past school year, RISE literally proved to be a soaring success, thanks to a collaboration between the State College Area School District’s Office of Equity and Inclusivity and Penn State Professor Randy McEntaffer in the material sciences and engineering department.

McEntaffer started the after-school program to attract underrepresented students to science. Coached by him and his graduate students, 17 participants in grades 8-12 designed, constructed and programmed rockets for gathering atmospheric data. Their weekly virtual meetings over nine months led to two afternoons of firing rockets up to 2,000 feet.

After its ascent, Sodeinde’s rocket parachuted down about a half-mile away. Packed in its nose cone were a single-board computer with an SD card, a camera, and various sensors.

“We modeled these rockets before on computer software and simulated a flight launch,” Sodeinde says. “We’re going to take the data that our computers collected and compare it to that simulated data to see how they differ and think about what would have caused the changes.”

Inspiration for the year-long project came from The McEntaffer Group’s research on fabricating materials for astronomical telescopes used on NASA missions. Suborbital rockets help the group field test its work. 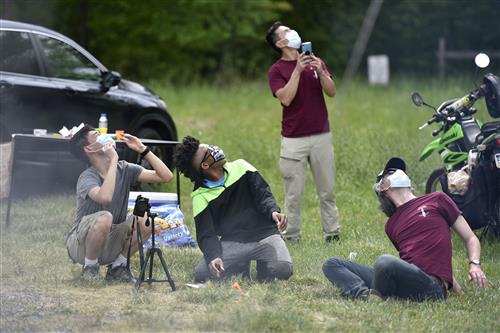 In starting RISE, McEntaffer hoped the allure of rocket science would draw more students of color to physics, engineering and other STEM fields and increase the disproportionately low percentage of those earning science degrees.

“We have an issue where we would love to diversify our department more, but there’s a pipeline issue where those students are being pushed away from STEM at an early age,” McEntaffer says. “So the goal for us was to reach students at a younger age. Well, we do rockets, so let’s do that with the kids. It’s an easy thing to get excited about.”

Supported by a grant from the Battelle research corporation, McEntaffer turned to SCASD Director of Equity and Inclusivity Seria Chatters to raise interest. Pandemic protocols scuttled an initial plan for students to develop a sensor payload for a NASA rocket, but the online workshops still sought to be as hands-on as possible under the circumstances.

Sodeinde, who wants to study molecular biology, liked being introduced to coding and electronics. For eighth-grader Sofia Cardenas-Miller, the best part was using software to design simulated rockets.

“I was able to see how different wings and motors work,” she says. “It was a really cool experience I hadn’t done before, and I definitely learned a lot.”

Sophomore Elijah Adu enjoyed the entire process, from making the rocket’s body and circuitry to programming sensors. “It was fun seeing all these sub-components come together to build something that actually works,” he says.

If all goes according to plan, he’ll have more opportunities. The program is expected to continue in the fall, ideally in-person at State High. New students would build model rockets while their returning classmates focus on the original NASA rocket plan. That’s an exciting prospect for McEntaffer, who looks forward to soldering, 3-D printing and other activities an online program couldn’t manage. 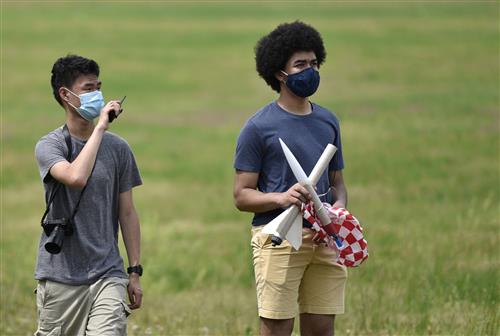 “A lot of the stuff that’s super cool they didn’t get to do,” he says. “But even so, with the things they did get to do, when their code finally worked or when their rockets were finally built, you could definitely see we got through to a lot of students, and that was really important.”