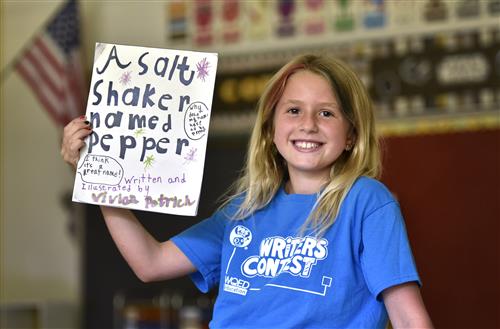 Vivian Petrich has proved that, in the right hands, writing an award-winning children’s book can be child’s play.

Over the summer, the Park Forest Elementary School third-grader’s A Salt Shaker Named Pepper topped the field in the WQED-sponsored PBS KIDS Writers Contest’s second-grade category. Her tale of a shy salt shaker who wins over classmates was one of 27 finalists in grades K-5, out of more than 700 submissions from Pennsylvania, West Virginia, Ohio, Delaware and Maryland.

“Vivian hopes to one day write and illustrate children's books,” said Beth Hopkins, Petrich’s second-grade teacher. “Her book is evidence of the joy she takes in writing and illustrating her stories. It’s exciting to see that Vivian is well on her way to reaching her goal.”

Vivian, who also illustrated her work, had been jotting down snippets of fiction in notepads since kindergarten when she read Helen Lester’s classic A Porcupine Named Fluffy in class while learning about character traits and feelings. Inspired, she crafted the story of Pepper, who introduces himself to classmates hesitantly only to have them laugh at his name. He flees in tears to the restroom.

In walks a sympathetic doughnut who befriends Pepper by admitting he’s teased for being named Bagel. The next day — spoiler alert — the class springs a surprise: In a show of empathy, everyone adopts a nickname to make Pepper feel welcome. Molly the eggplant becomes “Potato.” George the pumpkin chooses “Carrot.”

“I just felt like I needed a bit of a fun part to the story because, with most books, I feel like they have happy endings,” Vivian said. “I thought that my book could have a happy ending, and it was really fun to do the writing and the pictures.”

In Pepper’s case, the artwork shaped the story. Petrich first drew scenes, then matched her text to them. Dialogue, she said, “kind of popped into my head like with J.K. Rowling when she was writing Harry Potter.” Her literary tastes run to realistic fiction, with The Baby-Sitters Club and Judy Moody series among her favorites. But as a writer, she’s open to other styles. 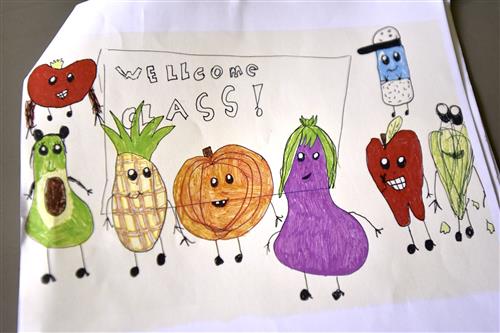 “I’m going to try nonfiction,” she said. “I only wrote nonfiction once, about hamsters. I love hamsters.”

She also loved second grade with Hopkins and paraprofessional Amanda Hill, calling the year her best so far in spite of the pandemic.

“Vivian wrote her winning book on her own at home using many strategies we learned in second grade such as using dialogue and getting ideas for our own writing by studying mentor texts,” Hopkins said. “During our final reading unit of the year we studied a number of familiar fairy tales, and Vivian and two friends then spent their recess time writing their own fractured fairy tale titled Wormilocks and the Three Birds. It has been a joy to watch her grow as a writer and see the culmination of her growth in her winning book.”

As an acclaimed author now, Vivian can dive back into her notebook and tap into an imagination that has conjured such past stories as Sandy the Sea Turtle Stuck With the Flies. She doesn’t yet have anything in mind, but she’s confident inspiration will strike.

“It’s kind of like something will happen,” she said, “and then I’ll start to write.”

All of the finalist works, read aloud by their authors, can be seen at www.wqed.org/education/writers-contest/2021-winners.