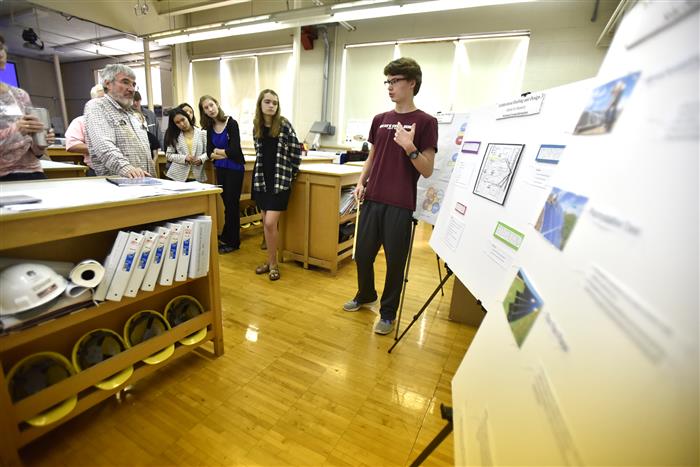 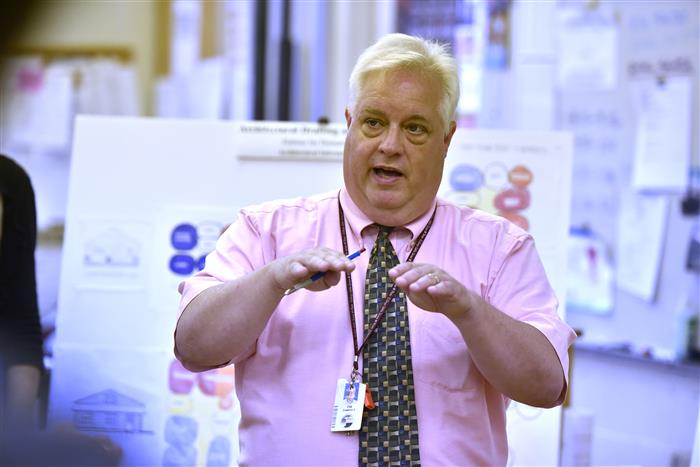 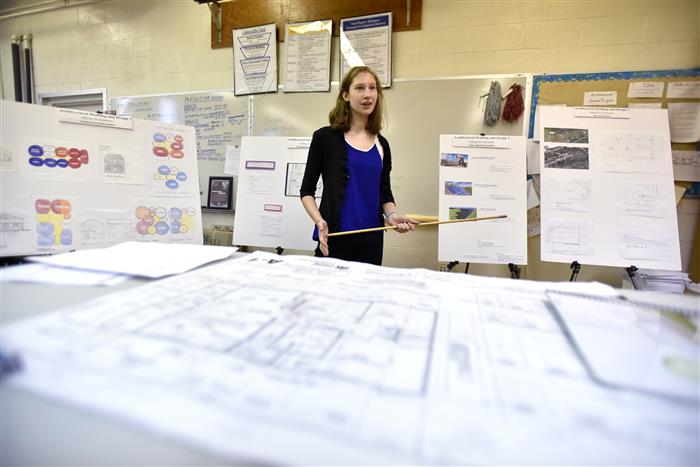 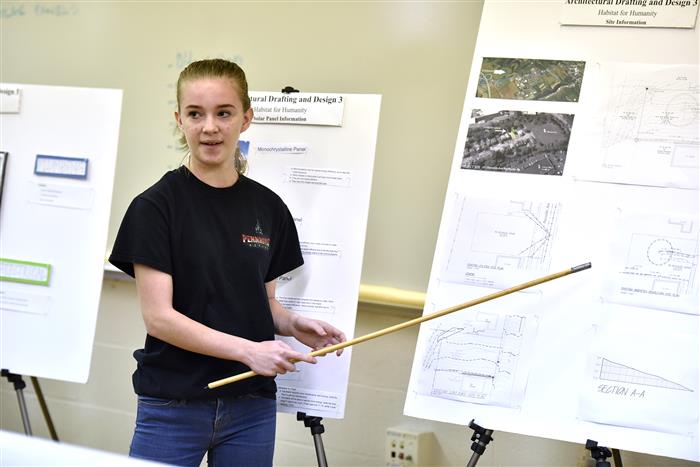 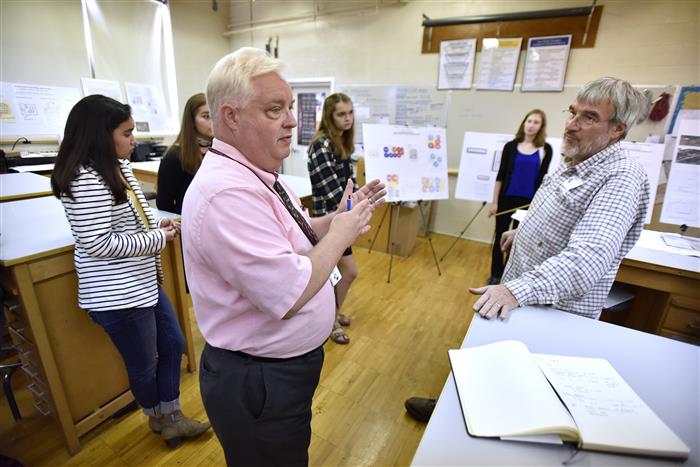 With one large project, several State High students have been on the home stretch from the very start.

This fall, students in Chip Crawford’s Architectural Drafting and Design 3 class in the Career and Technical Center have been designing a 1,200-square foot, two-story house — for real. Using class designs, the local Habitat for Humanity chapter hopes to start building on a Bellefonte lot in the spring.

Teams have been working on every aspect: site layout; mechanical, electrical and plumbing diagrams; interior floor plans; exterior renderings; even the possibility of solar panels for lower energy costs and greater sustainability.

Recently in their classroom, the students presented their initial work to Habitat for Humanity board members and other visitors. Impressed board members offered feedback to help students fine-tune the various designs and work toward completing the plans in December.

“It’s so cool,” junior Abbie La Porta said. “Oh my goodness, there’s actually going to be a house. Our design is going to turn into a reality, and that’s just the coolest idea for me because we’re only 16-years, 17-years-old and we’re designing our first house. And we’re going to get to provide it to a family that needs a house. I don’t know what could replace that experience.”

Crawford, a class of 1981 State High alumnus, had another idea.

He suggested his Architecture Drafting and Design 3 students instead. Why not? They had worked with mock-up Habitat for Humanity designs in their spring ADD 2 class, and Crawford was confident they had the skills and interest to take on more than an academic exercise.

“This is taking things the whole way through, dotting your i’s and crossing your t’s,” Crawford said. “But I think the young people have an understanding that this is the real world, and they’re going to give it whatever they can to make this happen.”

Sarah Klinetob Lowe, a housing systems specialist with the Pennsylvania Housing Research Center on the Penn State campus, has volunteered as an advisor. She approves how the students are viewing the project holistically, taking into account how different systems interact, planning an integrative design that includes exploring solar technology from the start rather than trying to add it later and running into unforeseen obstacles.

She also admires the communication among the teams.

“There are students on each of the teams, and not just one thinking in their silo and maybe later telling the mechanical team what they’re doing,” she said. “They’re all talking and integrating all these pieces from the beginning, and that’s what’s the most exciting thing about this project so far. As we saw that with their presentations. They started to see things across each silo. I think it’s going to go great.”

Senior Katie Bair said she and her classmates are proud that their assignment eventually will lead to a home for a family. Despite the complexities of coordinating the teams, she has enjoyed the challenge, the kind of work she hopes to tackle more as an architecture student in college.

“The biggest component for me is incorporating my drawing and artistic abilities with a career that enables me to help the community,” she said.

For his part, Crawford has been pleased with the progress. Line by line, figure by figure, his vision for the class is taking shape.

“I feel today went very well,” he said after the presentations. “The students really had the opportunity to see that this is going to be a real project. When everybody showed up, the students took it to heart, and I believe the outcome is going to be comparable to an architectural firm, a good product we’re going to provide for Habitat to build a house in the spring.”