Identification and Resolution of Issues Together 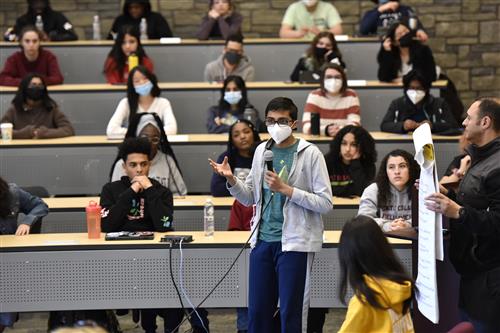 As part of its ongoing efforts to improve school climate — which have included the first Lift Every Voice: A Cultural Celebration show featuring students of color — the State College Area School District voluntarily reached out to the School-SPIRIT program in light of community feelings from State High experiencing racial tension this year.

“One of the key pieces was during that time, a number of our students of color were really feeling that their voices were not being heard,” SCASD Equity and Inclusivity Director Seria Chatters said.

After a school-wide invitation was sent, 46 students signed up for the event, joined by high school and district administrators there to support but, per DOJ rules, excluded from group discussions. Facilitators included individuals from the Pennsylvania Office of the Attorney General’s civil rights enforcement section, the Pennsylvania Human Relations Commission, the Center for Schools & Communities, and a Pennsylvania State Police unit that investigates hate crimes.

“We want to provide you with safe experiences where you can feel like you can share, and I’m excited about that process,” SCASD Superintendent Bob O’Donnell told students.

To start, students met with facilitators only in six homogeneous identity-based groups to list school strengths and challenges. Afterward, each group presented its results and during lunch, students voted on which issues to further discuss. 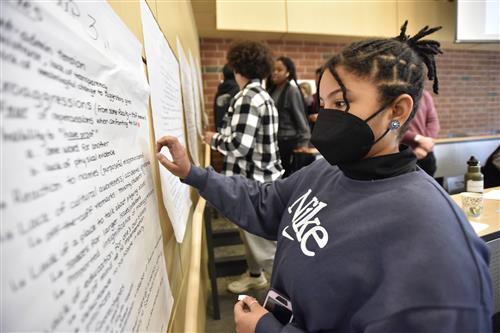 “I went into this because I thought it was a good way to voice my opinions on the issues that are happening at school,” Pablo Aradillas Fernandez said.

Among the positive elements, students singled out the equity and inclusivity office, the mental health support system, the amount of academic support, extracurricular clubs and activities, abundant resources, caring teachers, and the building itself.

Top challenges, as voted on, included communication with administrators and faculty, administrative transparency, microaggressions against students of color, inadequate acknowledgment of religious and cultural events, and a lack of school unity. After lunch, students reconvened in mixed groups to brainstorm potential solutions and, as in the morning, share the ideas recorded on easel pad paper.

“It was fantastic to first be able to hear different perspectives from people I share an identity with,” said Isabella Caceres, a student government officerDan who volunteered to help foster better ties with school administrators. “Later in the other groups, everyone’s perspectives were being shared, which made a great environment for creating forward-thinking solutions.”

“They were engaging,” she said. “We could see that they cared about the issues. At least if things weren’t being done before, they’re trying to help change issues in the school and solve problems.”

Eventually, the DOJ will provide the school administration with a report containing all of the student feedback and proposals. Already, there’s a School-SPIRIT council with 12 members elected by their fellow program participants. Going forward, the council will advise administrators about student concerns and work with them on implementing solutions noted during the program.

“I feel like that’s the important step in something like this, opening a way for students to directly have a method of contacting the administration,” he said. “Because I feel like from there, things start to roll forward on their own.”

Like Aradillas Fernandez, Caceres, Abraham and Liu, Tia Pruss will sit on the council. She’s optimistic about its future, saying she personally wants to ensure administrators follow through on suggestions.

“I think one of our big roles is to make sure we keep reaching for better,” she said. “If we don’t get there, at least reach for better.”