A True Taste of American Culture 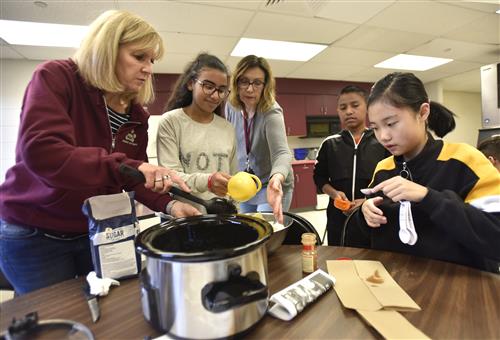 For most English as a Second Language students, the term “relish tray” probably doesn’t often come up in conversation.

Ivis Gonzales and Shangbo “Hill” Li, however, found it useful to know what they were making recently during their ESL period. They chopped celery and carrots, arranging the sticks with black olives and cups of ranch dressing to form trays for the annual Thanksgiving lunch for ESL students at Mount Nittany Middle and Mount Nittany Elementary schools.

Across the room, a previous vocabulary item bubbled in a slow cooker.

“We made the applesauce,” Li said.

Li, from China, and Gonzales, from Honduras, were among 29 ESL students from around the world who prepared a traditional holiday feast for themselves, classmates, teachers and paraprofessionals. Courtesy of the teamwork, everyone dug into plates laden with turkey and gravy, stuffing, mashed potatoes, sweet potatoes, applesauce, green beans, cranberry sauce, cornbread and, of course, pumpkin pie — a true taste of American culture. 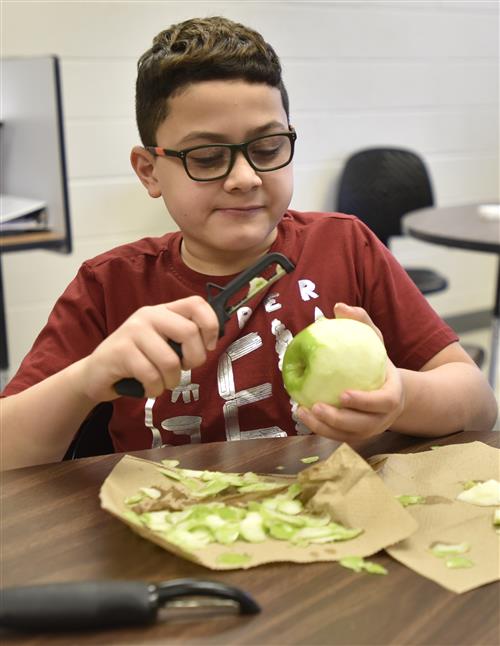 “We cook everything,” Mount Nittany Elementary ESL teacher Lori Maxfield said. “It’s labor intensive, but it’s worth it because for the kids, it’s a great opportunity.”

For the eighth year, Maxfield partnered with Mount Nittany Middle School ESL teacher Sara Caracappa in combining language and cooking lessons. Students, some of whom had never tasted pumpkin pie or cranberry sauce, first read about Thanksgiving’s origins and place in American culture. They also studied the feast recipes, which they took home in a booklet for their families to try.

Along the way, they expanded their kitchen vocabulary with such words as “colander,” “serving size” and “spatula.” Seventh and eighth-grade students even wrote Thanksgiving-themed poems and interviewed each other to share reflections and practice speaking.

“It’s tied to the curriculum; it’s not just fun and games,” Caracappa said.

Using utensils and cookware from their teachers’ kitchens, third to eighth grade students do all the peeling, mashing, cutting, stirring and cooking at school. 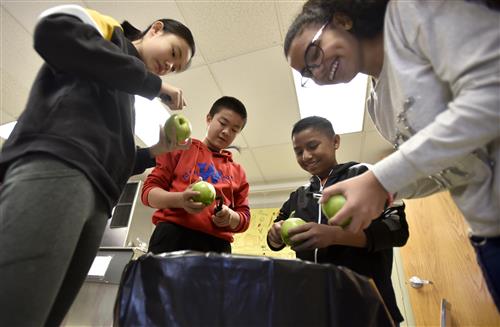 “It’s kind of like a rite of passage for the third-graders,” Maxfield said. “They can cook. One of my kids in fourth grade, she’s been talking about this for weeks.”

Though mistakes happened — such as when sweetened condensed milk goes straight from the can into a pie shell — eventually everything came together. Aromatic trays filled a serving table. Pumpkin pies waited in a row. Tables decorated with Thanksgiving tablecloths and centerpieces were set for 40 students.

Eighth-grader Asifa Warraich, from Pakistan, helped bake this year’s impressive batch of pies, but her favorite part of the whole experience boiled down to a universal pleasure. 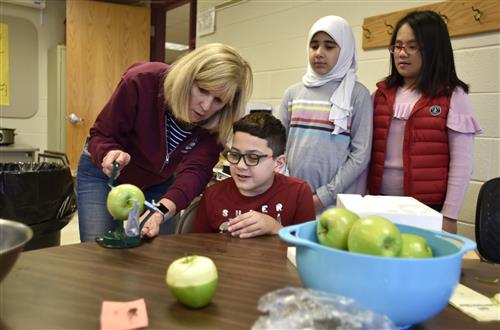