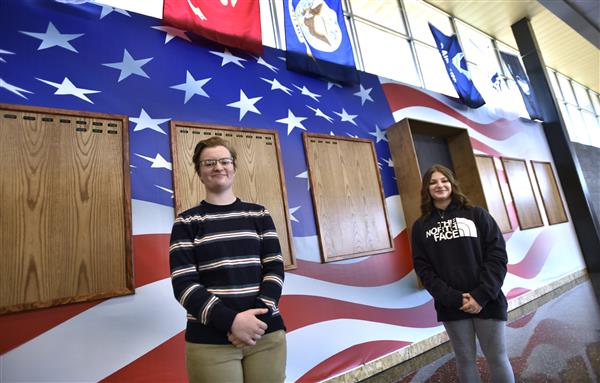 Walk into the heart of State High, and it’s evident the armed forces are held in high regard.

The school’s emerging Military Wall of Honor overlooks the student hub a story below, gracing an elevated walkway for all to see. Each branch’s flag hangs above a respective plaque bearing metal tags with the names and classes of service members or veterans who went to State High, a vinyl American flag image providing an eye-catching backdrop for the installation.

One tag recognizes Eli Kollat, a senior bound for the Navy and one of the project’s leaders.

“This is to honor State High students who graduated and moved forward to serve their country,” Kollat said. “I’m going to serve. I want people to know students from this school are part of the military. I think it just adds a connection to the armed forces.”

Not yet finished, the wall began two years ago when Kollat and classmates in State High’s military sciences class were handed a mission: create a military service tribute for the new State High. Inspired by the memorial plaques that used to be in the previous North Building, then-principal Curtis Johnson and Chris Pechtold, the military sciences teacher at the time and a Navy veteran, suggested a contemporary update with more recognizable names for today’s students.

Pechtold’s students dove into the challenge, forming a design, obtaining school funding and grants, and securing contributions from classmates, businesses, residents and state representatives. “The students really turned it into a school and community project that involved a lot of people,” he said. 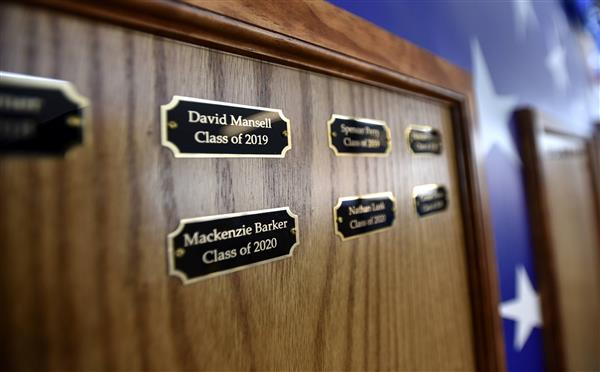 “Anything you can do to help honor and recognize military people, I was glad to do it,” Gibbons said. “I’ve seen so many students benefit from enlisting in the military.”

As an Army field artillery veteran with 20 years of service, including command positions, Faczan provided advice for the design, such as the proper way of placing the service flags from oldest to newest. Like Gibbons, he’s impressed with the results, noting he and his friend just gave students ideas “and let them run with it.”

“This is fabulous,” he said of the wall. “It almost brings tears to my eyes to see that we’re honoring those people who deserve to be honored.”

Both the pandemic and Pechtold’s departure for another job disrupted the wall’s progress until recently, but it’s now back on track with Kollat and sophomore Jenna Bilyeu taking the reins to see the project to completion. This year’s plans include finishing a central case for displaying military memorabilia and researching ways through school and community connections to add names beyond the annual group of seniors who enlist, enter service academies or join ROTC programs.

Initially, they intend to focus their search on graduates from the past two decades, though older veterans with proof of service will always be welcome. “I feel like if we get too far back, even teachers who have been here for a while might not know them, which kind of defeats the purpose of honoring people who went here that we know,” said Bilyeu, the contact for new names at [email protected].

Already on the wall is David Mansell, class of 2019 and currently with the Pennsylvania Army National Guard.

“It’s an honor to be included with all the people serving in the U.S. military from State High,” he said. “Thank you for including me, but more than that, thank you for recognizing all of the military people from our school.”

Someday, Bilyeu hopes to see her name as an Air National Guard member, but for now, she feels a different sense of pride.

“It means a lot to all of us who were part of the project to see that it’s part of State High now,” she said. “We got to do this, and I feel that it’s really cool.” 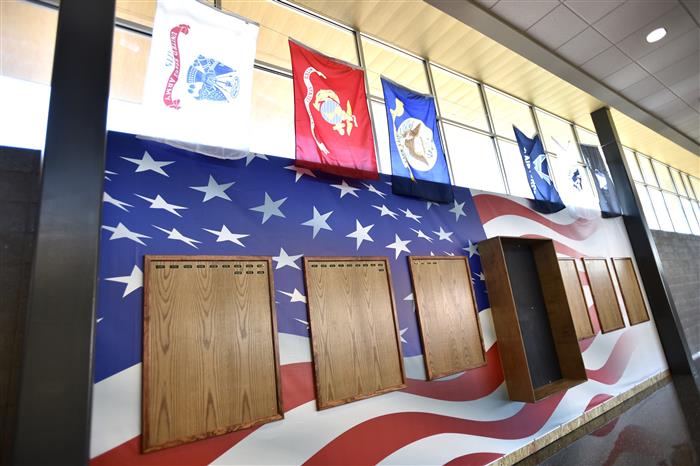