Campbell customarily starts classes with an icebreaker, or “whip around” as she calls it. This time, she asks what stood out from seeing a production of Much Ado About Nothing together. On her turn, Campbell shares that the actors could have expressed humorous malapropisms more emphatically so the audience could catch them better.

“How might you adapt that thought to your Shakespeare sonnets and monologues that you’re working on?” she says.

For two decades, as a learning enrichment/gifted support teacher, Campbell has taken to heart the Bard’s belief that all the world’s a stage through her brainchild, ARTsmART. Since founding the extension of the State College Area School District’s learning enrichment program, which provides enhanced academic opportunities, she has devoted herself to guiding talented high school students interested in music, visual arts, theater or dance.

Students apply to the program, then pursue independent study goals, either out of the ARTsmART center within the performance arts wing or from off-campus opportunities.

“I’ve always felt that the arts are extremely important in education,” Campbell says. “If students are involved in the arts, not only do they have a creative outlet, but they learn to think in a different way. That allows them to expand their intelligence and apply it differently.”

In June, she’ll bid ARTsmART farewell when she retires after 38 years with the district. But she’ll leave behind a rich legacy that began well into her career.

As an elementary teacher with a Westminster College degree in speech and theater, she joined the first districtwide learning enrichment team, tasked with integrating arts activities into elementary classes. 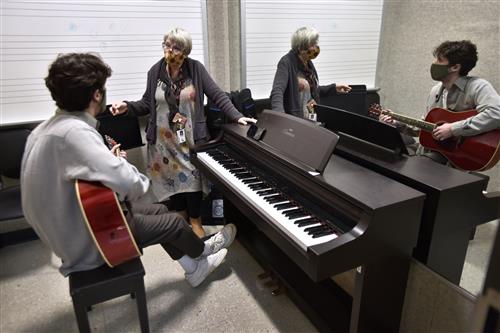 In 2000, she shifted to State High, co-founded the advanced performing arts class and became the Thespians advisor. After a while, she also grappled with a logistical problem. Her enrichment office and the music, art and photography rooms used by her students — as well as the auditorium for visiting artist workshops — stood far apart in the old high school. A satellite desk proved to be a temporary fix — until a superior solution came along.

Taking inspiration from the small schools movement, she reclaimed a disused art office and added furniture to a hall beside the auditorium and music practice rooms. Thus ARTsmART’s heart was born, a hub for studying or creating beneath funky murals and theater sets. Arts students could consult Campbell for academic counseling or information about summer programs, collegiate majors or private instruction. If they needed help with devising a way to continue their studies while performing, as one ballet dancer did, they knew where to go.

“It became an example of a place where students could feel at home and feel like they had a community, feel like they could trust each other,” Campbell says.

That spirit continues in the ARTsmART center’s new location, a cheery space filled with tables and chairs and bordered by music practice rooms and a kitchenette. Students say they appreciate the peer support as much as the opportunities to pursue their respective interests.

“We all have one thing in common, and that’s the arts,” Bella Poehner says. “It’s nice to be able to have a group of people you can relate to.”

Elijah Snyder and Olivia Biever also enjoy the camaraderie, in addition to the chances to squeeze in some music practice, catch up on homework, or take a quiet break with friends. For Elana Collens, ARTsmART builds connections, which Campbell is especially proud to have fostered. Last year, Collens recalls, Campbell encouraged sharing thoughts and drawings daily in a collective ARTsmART journal to help students cope with the stress of the pandemic.

“It’s such a creative space where everyone truly is able to be themselves,” Collens says. “It’s a wonderful program that Jill has built, and I hope it can stay at State High for more years to come.”