Pennsylvania State Board of Education Representative 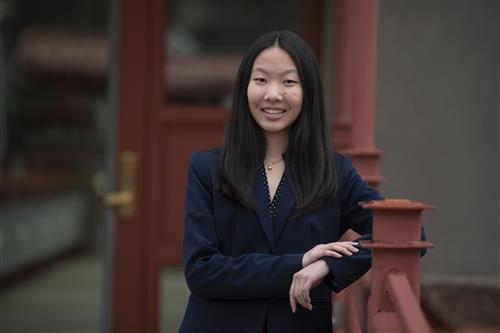 This summer, Claire Chi will become one voice for nearly 2 million others.

“It’s such a great honor to be appointed,” she says. “As the junior representative, I will represent 1.8 million students in Pennsylvania. There are so many voices and so many stories, and I’m ready to hear them all.”

While with the board, next year as a senior representative, she will sit on both the Council for Basic Education and the Council for Higher Education. She’s the first State High student to serve on the board since her role started in 2008.

“Claire is the perfect choice for this position,” State High social studies teacher Andy Merritt says. “She is thoughtful and reflective, but most of all she listens. She genuinely wants to hear what students and teachers think. We are fortunate to have her represent our school, but more importantly she will represent the students of Pennsylvania with one purpose: To make public schools the best they can be for every student.”

When she applied earlier this year, Chi already had built connections with peers in school and Pennsylvania. She’s a member of the student government Leadership Council, where she’s accustomed to policy discussions, and the rising captain of the debate team. In addition, she serves on the board of the Pennsylvania Association of Student Councils, which consists of regional representatives, and will co-lead Students for Education in Pennsylvania, an organization formed by the current senior representative.

SEPA aims to expand student voice to a more diverse group of school districts than the student councils association represents. From working with both organizations, Chi hopes for input that will help her share student perspectives at the state education board’s bi-monthly meetings.

“One of my first priorities as the junior representative will be opening the lines of communication between myself, the students and the board,” Chi says. “I’m really grateful to have the opportunity to work with SEPA and hear from students from every region of the state.”

Right off the bat, however, she’ll advocate for two issues close to her heart.

Food insecurity affecting children concerns her, especially as pandemic grants for subsidizing school meals dwindle. Her interest stems partly from living in underfunded school districts in other states prior to moving to State College, but also from organizing food drives with Dancing for Hunger, a student-led nonprofit she started.

“We should encourage regional food assistance programs and other nonprofits to support local schools,” she says. “These programs and nonprofits, though small individually, could make a really big impact collectively. By promoting these direct pipelines from community organizations to school districts, I think we can invest in sustainable meal programs before the lack of them and funding harms our low-income communities.”

Another initial focus will be improved standardized testing accommodations for English language learners, a need she says became clear to her while volunteering as a teaching assistant for Spanish-speaking students and observing them struggle with taking tests. She supports time extensions, longer windows for allowing accommodations, and oral translations of tests if written versions are unavailable.

“English learner students score a lot lower than other groups of students,” Chi says. “So when they’re returning to school after the limitations of remote learning during the pandemic, they’re facing a disproportionate struggle.”

During her term, Chi intends to visit schools statewide as much as possible for a wide range of conversations. But she’s hoping some illuminating ones occur right at home.

“I’m very lucky to be in the State College Area School District,” she says. “The students here are so passionate and dedicated to initiating the positive change we want to see in our lives. I hope they will share their perspectives and experiences with me as I take this seat on the board to advocate for education, because this is a ‘we’ effort.”