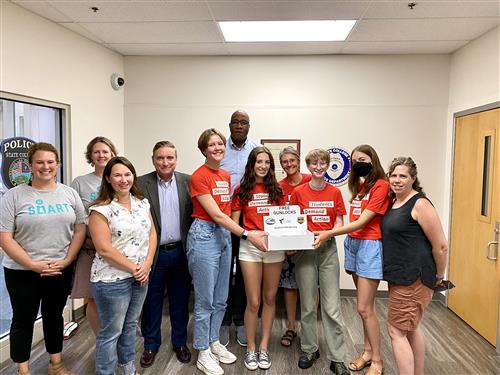 One afternoon last May, a notable collection of individuals gathered at State High.

Started by Delta Program high school students, the State College Area School District chapter of the national Students Demand Action organization discussed its initiative to share safe firearm storage practices with district families via a letter and an informational graphic. Their presentation met with approval from the audience members, who offered encouragement and suggestions. Everyone in attendance agreed on the importance of ensuring all families in Centre County understand how to store firearms safely, and the group committed to working together to communicate safe storage practices.

Weeks later, the county commissioners formally signed on to the cause by issuing a proclamation urging safe firearm storage in homes. On July 18, the students and the school board sent a joint letter to district families with safe storage information.

“I was very proud of the work we were able to do, and all the people in the community who worked to make this a reality,” said junior Lilly Frank, the chapter’s co-president with Grace Myersmith.

Troubling statistics spurred them and chapter members Lorelai Radzanowski and Maya Dombroskie to act. Each year, 350 children under 18 unintentionally shoot themselves or someone else each year, and almost 700 children annually die by gun suicide. On the other hand, safe firearm storage practices have been shown to reduce the risk of self-inflicted and unintentional firearm injuries by up to 85 percent.

“You see, at the state and national level, there’s a huge risk of not only unintentional shootings, but also teen suicides,” Frank said. “Having secure firearm storage is really important for child safety at home.”

Other facts that make this such a critical issue for our community:

Sadly, SCASD’s Students Demand Action chapter notes, our community has experienced the realities of these statistics. Chapter members endorse the gun safety recommendations from the national Be Smart for Kids organization:

“If anyone needs one, stop by,” Centre County Sheriff Bryan Sampsel said.

Frank's interest in firearm safety began in eighth grade and was inspired by the occurrence of school shootings. In particular, the tragedy at Stoneman Douglas High School in Parkland, Florida prompted them to look into starting a Students Demand Action chapter. But after learning only high school students could do so, they had to wait. The pandemic delayed further progress in ninth grade, but by March of 2021, the chapter finally began with English teacher Amy Allison as its advisor.

After discussing approaches toward sharing safe firearm storage practices as a community service, the students decided a letter to district families would be the best way to reach parents and guardians. Last year, they made presentations at school and to the SCASD Board of Directors, steadily gaining traction and supportive allies within the community.

Frank hopes that, eventually, families will receive the chapter’s safe storage letter before the school year starts as a reminder.

“It’s important that we build a legacy with this resolution that will go beyond our high school experience, that we make sure it’s sent out every year and isn’t pushed to the back burner,” Frank said. “This can do a lot of good in the community and really decrease the rate of firearm injuries and deaths.”