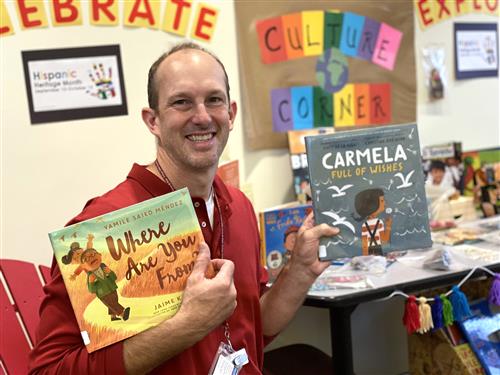 Lots of people live out of suitcases, but how many can say they’ve taught out of one?

Mount Nittany Elementary School librarian Dustin Brackbill and library paraprofessional Cheryl Anderson can. In honor of Hispanic Heritage Month from Sept. 15 to Oct. 15, they recently used a special “traveling suitcase” from the University of Florida to turn their library’s Cultural Corner into a display of books and artifacts celebrating Latin American people and cultures.

“It’s really been all about building curiosity and connections,” Brackbill said.

Earlier this year, he and Anderson applied for a free “suitcase” from the university’s Center for Latin American Studies after learning about the scholastic program from a MNE parent. A sturdy trunk subsequently arrived just in time to create a colorful station by the library’s upper entrance.

“We have worked the last few years in a variety of ways to help celebrate this month, so I explored the idea and reached out to Principal Mark Feldman and English Language Learner teacher Courtney Laninger for input,” Brackbill said.

Among the items meant to encourage library time discussions were two traditional Mexican toys, a ring-and-pin game called a balero and a spinning top called a trompos. Also included were a hacky sack and doll from Guatemala, a boys’ school uniform from Costa Rica, a small piñata and a Bingo-like game with pictures for building vocabulary. 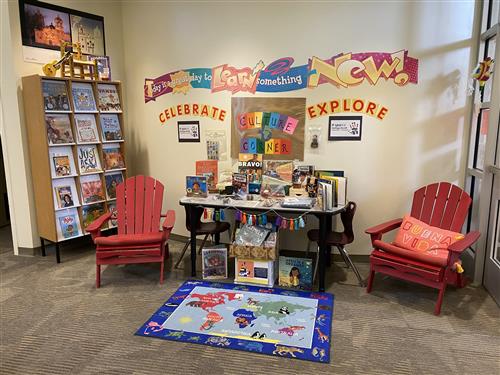 To the trove the librarians added souvenirs from their travels, including his ceramic Mexican mask and her painted wooden boxes. Anderson’s artfully-arranged display blended books from the trunk with ones from the library’s collection, providing a wide selection of stories, biographies, and introductions to Central American, Caribbean and South American countries as well as Spain.

“The goal was to connect kids’ lives there to kids’ lives here: what similarities do we see and what differences,” Brackbill said. “During (library) classes, we were comparing literature and childhood entertainment and finding connections.”

Students also could show their families the books and artifacts during MNE’s back-to-school night.

Though the library could only keep the suitcase items through Sept. 30, its titles will remain in the Culture Corner for the duration of the Hispanic Heritage Month. Brackbill and Anderson said they were pleased to see students enjoying the station, one of the many exhibits that district librarians design throughout the year to promote multicultural awareness as well as reading.

“This has been a great collaborative success,” Brackbill said.