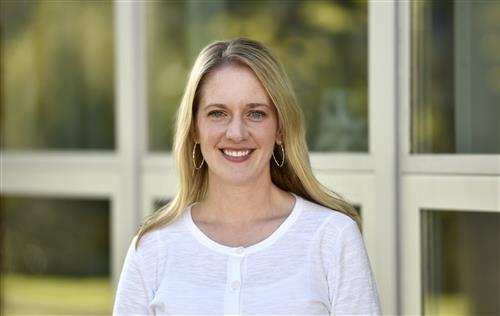 When Dr. Kelly Mark welcomes Corl Street Elementary School students back in August, she’ll not only start a fresh year.

She’ll usher in a new era.

As the school’s transformative renovation draws closer to completion, Mark prepares to succeed Principal Charlotte Zmyslo, who’s retiring in June. Her hiring was approved at the May 6 SCASD Board of Directors meeting, and her first day will be June 17.

Mark’s first days on the job will be a double homecoming. Before serving as the K-12 assistant principal in the Penns Valley Area School District this year, she spent 14 years with the State College Area School District, including a one-year stint as a Corl Street second grade teacher.

“It is an honor to come back to State College to serve in a leadership role in this way,” Mark said. “Corl Street is a tight-knit neighborhood school, and I’m really looking forward to being a part of that community.”

After earning a Bachelor of Science degree in elementary and kindergarten education from Penn State in 2004, Mark joined the Radio Park Elementary School faculty. With the exception of her year at Corl Street, she taught at Radio Park until 2011, when she became a professional development associate in the district’s award-winning Professional Development School partnership with the Penn State College of Education.

As a PDA for four years, she supervised PDS intern teachers, taught methods courses and planned professional development opportunities. Previously, she had been a PDS mentor for an intern teacher. In 2015, she returned to Radio Park to be a third grade classroom teacher.

Married with four young daughters, Mark also holds a master’s degree and Ph.D from Penn State, both in curriculum and instruction. The National Association of Professional Development Schools honored her in 2017 with its Outstanding Doctoral Dissertation Award.

During her second teaching stint, Mark branched out. The district’s Leadership Institute chose her in 2016 as one of 28 faculty members to participate in professional development sessions with Superintendent Bob O’Donnell and other district leaders. A year earlier, she had planned and led the K-6 new teacher induction program.

Both experiences helped prepare for her Penns Valley duties, which included supervising the district’s counseling department, overseeing support programs for academics and behavior, and assisting building principals as needed. She’s grateful for her time in Penns Valley that provided “phenomenal” leadership learning, but now her focus lies squarely on the challenge ahead.

“I just can’t wait to see the students and their families and get started in this beautiful new space,” she said. “It’s going to be great.”