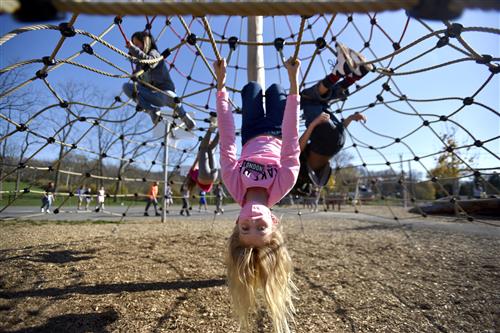 Other nature-based features include grass mounds, embankment slides, rope tree climbers, log scrambles, swing sets built with logs, and obstacle courses, though the playgrounds vary in some respects due to site differences.

Blending traditional and nature-based options, along with surfaces that provide greater accessibility for all students, the designs will serve as templates for updating all of the district’s elementary and middle school playgrounds eventually, according to a district master plan. So far, the plan is off to a rousing start, with glowing reviews from experts for the debut models at Radio Park and Spring Creek.

“I love the new playground,” Radio Park student Benjamin Herickhoff says. “There are so many fun things to do.”

High marks from some go to the log mounds and scrambles. “I like to climb up, and you can jump off it or you can just sit and talk on it,” Spring Creek’s Allie Nargi says. 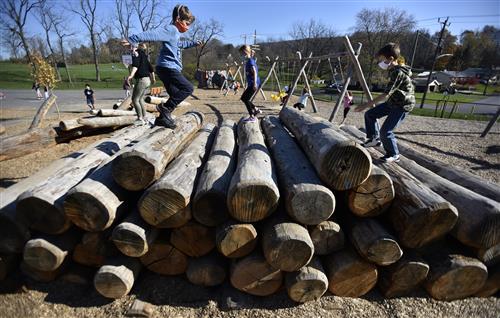 For others, rope climbing rises to the top.

“I like the big climber the best because you get to see the whole playground,” Radio Park’s Esther Luan says. “I also like it because I like to be high up. You can just sit up at top, maybe talk with friends and just relax.”

“I think it is fun to be able to climb, play on the wall with other kids and it gives a fun place to play tag and a lot of other games because of the holes in the wall, and it gives a good feeling to the playground,” he says. “It makes you feel like you are in the woods but you are still safe and able to be with friends.”

“My favorite is the ropes course because it is fun for friends to count my time as I work my way across,” Radio Park’s Maya Edmondson says. “I also like it because it is not too hard and still something I can get better at and set goals for.”

“The best thing on the playground is the group swing because I can push it with my friends and go on it and get pushed two times as high, and they don’t have it at that many other playgrounds in State College,” says Spring Creek’s Max Sahakian. 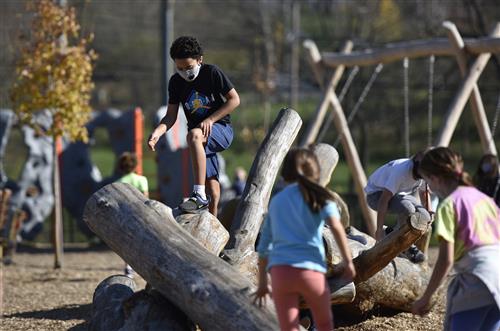 “The reason that the spinner is fun is that it feels like a roller coaster,” Radio Park’s Natalie Huggins says.

To be sure, as with any reviews, there’s room for improvement. Suggestions included adding seesaws, monkey bars and more spaces for hide-and-seek. But for his part, Mitchell Adams has no complaints about the Radio Park playground, giving it his highest rating.

“Everything about it is awesome,” he says. “I would go on it every day if I had it at my house.”