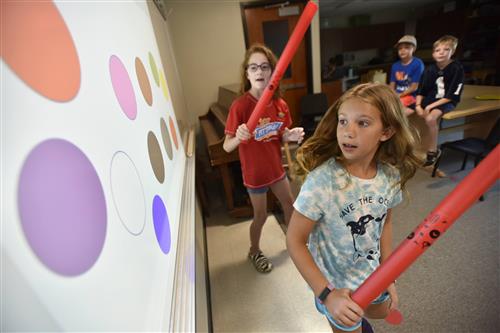 Round and round the students walked, playing musical chairs in an elementary school classroom.

But when the song stopped, finding an open seat was only the first test. To remain in contention, players had to name the color marking their chairs — no small task en español.

“The sooner that we’re able to get kids interested in a language, the better,” said Jonathan Klingeman, who runs Champs Camp as the district’s director of gifted, learning enrichment and Title 1 services.

“The one thing that I’ve been trying to look at for a really long time is world languages for elementary kids,” he said. “That’s been something parents have been asking me about since I took over my director role.” 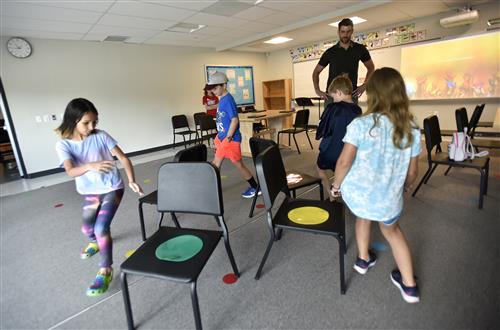 Free language study software provided lesson frameworks for teachers hired for the program, and also allowed students to continue learning at home if they wished — a spark Klingeman hoped to ignite.

“We know that the older a child gets toward adulthood, once those synapses start firming up, it becomes really difficult to learn another language,” he said. “So it’s a really important time frame for them.”

For their second class, the Spanish students tapped into their imaginations, building vocabulary by creating characters. Teacher Garrett Rickelman first introduced household and clothes words — la silla for chair, los zapatos for shoes — with slides and encouraged students as they echoed his pronunciation. He also showed that adjectives in Spanish, such as the colors previously learned, come after the nouns they’re modifying.

Then, using Chromebooks, students designed figures via a digital storytelling website and labeled the outfits and background objects chosen for the pictures.

“It’s fun to know another language so that if you go somewhere, if you go to another country, you can speak with them,” student Anna Miller said. 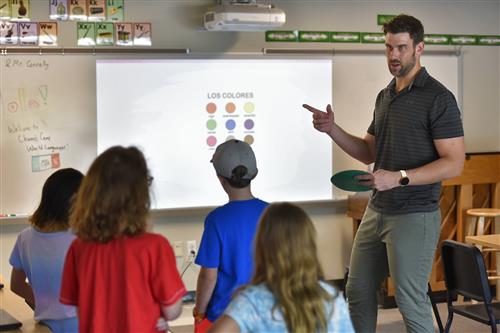 Classmate Otis Stover agreed: “My family likes to travel a lot, and I think it’s just cool to speak differently.”

Aria Tinsley, however, doesn’t want to wait for a trip. She hopes to practice with a Spanish-speaking friend.

The program’s successful debut pleased Klingeman, even if it meant one more thing to oversee during a summer that kept him hopping. Champs Camp’s wide array of offerings included a preschool program for families from marginalized populations, an expanded program for adult English language learners, and a weekly STEM/Literacy Night where families tackled a STEM-related challenge after reading a designated book.

“I’m super-excited about it,” he said about the language program possibly returning and even expanding next summer. “But it’s also scary, too, because I’m thinking, ‘What did I get myself into? Now families are not going to let us stop.’ But that’s good because it’s all about kids figuring out what they can do.”