The Circle of Partners in Music 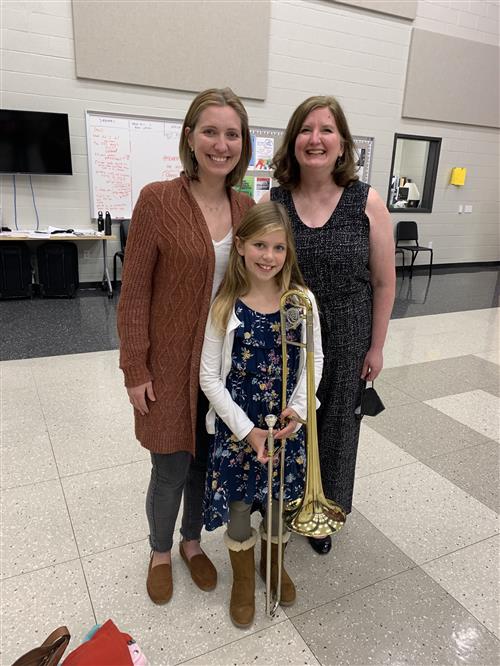 It was the first rehearsal for the Partners in Music program, the annual collaboration between the State College Area School District and the Penn State School of Music in which elementary students participate in ensembles led by Penn State student conductors.

Addy walked up to Thornton, a co-founder of PIM who still leads the program, and introduced herself, announcing, “I think you know my mom.”

Thornton did indeed; she and Addy’s mother went way back.

As one of Thornton’s music education students 15 years ago, Meredith LeRoy was among PIM’s first conductors in 2007 during her senior year. Now, coming full circle this fall, she watched her daughter in the orchestra, bringing back memories of her conducting experience.

“I remember thinking that the kids looked so small, and also being really intimidated by them. It was the first time I had ever conducted an elementary band,” LeRoy, a 2004 State High graduate, recalled. “But they were all so excited to be there, and their enthusiasm was contagious. It was one of the highlights of my experiences in the music education program at Penn State.”

Fifteen years ago, the program was much smaller than today. Only two district elementary schools participated, compared to all of them now, and rehearsals were held at Gray’s Woods Elementary School instead of the Penn State Blue Band building. Including LeRoy, five student guest conductors led the initial concert at Penn State’s Esber Recital Hall.

“After so many concerts of my own, it was a little strange to be attending concerts as a parent,” she said. “I am so proud of Addy, and happy to see her participating in a wonderful program like this. It brings back memories from my early years playing trombone at Boalsburg Elementary. My own experience through the SCASD music program was incredible, and I'm excited to watch Addy as she begins her own music journey.”

So far, Addy has enjoyed following in her mother’s footsteps in the trombone section. She especially had fun at the PIM rehearsals.

“I liked that there were conductors that were patient, and that we could all stay together at the same time,” Addy said. “I liked playing with people from different schools and getting to know other trombone players. It was really neat to play at the Blue Band building!”

After graduating from Penn State in 2008, LeRoy taught music in Bellefonte for four years, helping her appreciate PIM as an educator as well as a parent.

“The town and gown connections among the local music teachers are very strong, so it's really no surprise that a collaborative program like this would grow and thrive here. The Partners in Music program is yet another way that our SCASD music teachers go above-and-beyond to provide quality experiences for their students,” LeRoy said. “The concept of Partners in Music is really simple, but it's a win-win for everyone involved. The Penn State students get experience working with real elementary ensembles and the elementary students get more practice playing their instruments in an ensemble. But what sets this apart for the younger students is that this is the kind of experience that spurs them on — playing in the Blue Band building and the School of Music, performing a concert at the high school, working with college students. These young kids are seeing a glimpse of what their future could be if they stick with band and orchestra for the long haul. It's a fantastic program.”