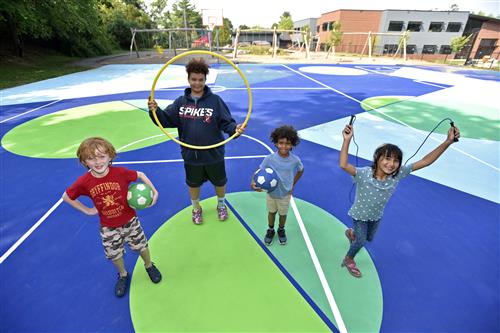 When artist Ann Tarantino contemplated a present for Corl Street Elementary School, she thought big — to the tune of 8,000 square feet and 250 students.

Tarantino, aided by the student body’s creativity, transformed that expanse of the school’s playground blacktop into a striking abstract mural. Made with 60 gallons of paint, her work marks a successful year-long collaboration completed in June. As part of Corl Street’s art curriculum, students studied the paintings of Henri Matisse to create collages that inspired Tarantino’s design.

“The colors really jump out and engage the viewer,” said Corl Street art teacher Courtney Latorre. “I love the use of the geometric shapes, something that was present in most of the student collages.”

It all started with Tarantino, an associate teaching professor of art at Penn State, having personal ties to Corl Street. Her 11-year-old twins graduated from fifth grade this year, and her 3-year-old daughter will enter kindergarten in 2023. A few years ago, she and her husband joined community discussions to keep the school open.

“It was important to us,” she said. “So having been through all that, I thought a lot about my connection to that site and to the little community within that site, and I wanted to give it a gift.”

Her decision also stemmed from a long-time focus on public art that reflects its surroundings and how its space is used. Before creating works nationwide and overseas, she was strictly a studio painter exhibiting in galleries.

“That started to feel really unsatisfying, to think I was spending all this time alone making things that possibly my kids would never see,” she said. “So that set me down a path of thinking about the intersection of public art with communities. I’ve made a number of more sculptural installations, but what I realized over the course of the Corl Street project is it’s most exciting to me when paintings specifically can be on a public scale and have a relationship not only to the site but also to the people who are going to experience it.” 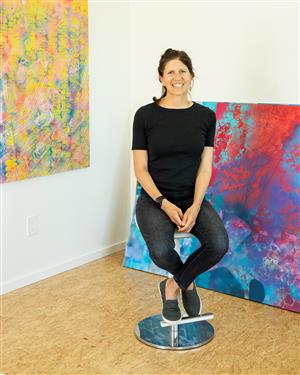 Initially, she and Penn State Associate Professor of Art Shannon Goff, a school parent also, received grants for Corl Street artwork from Penn State’s Center for Pedagogy in Arts and Design. Their efforts eventually diverged, with Goff pursuing an interior tile mural of student drawings that could be finished by year’s end. Additional support included funding from the school’s Parent-Teacher Organization, and Tarantino also self-funded.

During the summer of 2020, the professors began working with Latorre and art teachers Shannon Stallings and Susan Harter to build a concurrent course of study. One key book was Henri’s Scissors, about Matisse and his bold colors and simplified figures. Another was Hello, Wall, a tale of a community telling its stories through a mural.

“I introduced students to this project by centering it around the idea of community,” Latorre said. “After thinking about the ways we can share our stories through writing, music and art, we explored the idea of expressing them through abstract art.”

Each grade then made their collages that influenced three designs voted on by students, teachers and staff. As the clear favorite, the final choice echoed aspects of the nature-based playground, especially circles, as well as the natural world in general.

“It is absolutely beautiful,” Stallings said. “The use of cool colors brings a calmness to the playground.”

She and Latorre look forward to seeing how Corl Streets students respond to the mural in the fall, but already it’s a masterpiece among summer program campers. Barely had the paint dried before they began happily bouncing balls across the contrasting lines and dashing in and out of the circles — all in keeping with Tarantino’s vision of giving Corl Street a playful piece of interactive art. 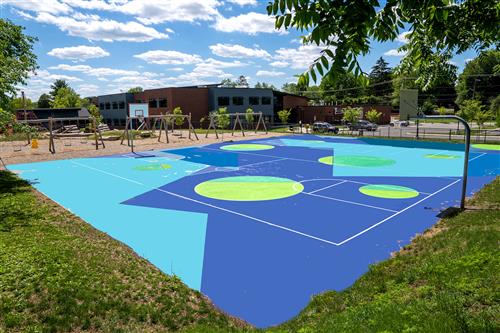