Charlie LaVallee cut right to the heart of why parents were smiling and children were fidgeting in anticipation inside Park Forest Elementary School’s gym.

“When you think about it, 10 kids getting bikes today, how great is that?” he said to his audience.

LaVallee had traveled from Wexford, home of his charity, to present adaptive bicycles to local students who need special education and services. In various bright colors, the bikes stood arrayed in a row on either side of him, like cars in a dealer’s lot, each bearing its new owner’s name tag and a red bow.

About $1,800 each, the three-wheeled bikes came with Velcro fasteners on the pedals, sensitive hand brakes and other special features that allow children with physical or intellectual challenges to experience the joy of bicycle riding. Variety even included a stand that creates stationary bikes for exercising indoors.

“For many families, that’s often out of reach,” LaVallee said about the bikes’ cost. “They have other expenses to take care of.”

Supported families at the Aug. 9 event applied to Variety’s program through the SCASD Special Education Department.

“We are very excited to have you here,” Director of Special Education Sharon Salter said in her introduction.

In the audience, Jim Fogleman shared the feeling.

“To think it started with one phone call,” he said.

Fogleman, a Delta Program custodian, took the call last January from his union regional director, Mickey Srgo, who’s also a Variety board member. Srgo said the charity had been trying to get a toehold in Centre County for a couple of years to no avail. Could Fogleman help?

He knew just the person.

Salter set up a preliminary meeting with Variety, then contacted families with invitations to apply. Months later, thrilled children wearing colorful helmets climbed on their bikes, some helped by their therapists.

To his delight, Fogleman saw one girl who just couldn’t wait.

“When she came into the gym and ran to the bicycle and was just vibrating, it was worth every minute we put into this,” he said.

As soon as she climbed on wearing a My Little Pony helmet, Houserville Elementary fourth-grader Cheyenne Lychens loved her bike — especially the cargo area between the rear wheels.

“It’s pretty and fun, and I can put stuff in the back so I won’t have to carry it,” she said.

Christie Lychens said she appreciates her daughter’s having a chance to ride easily and safely. Taking the training wheels off a regular bike was tough for her, Lychens said.

“Being on this, she seems ecstatic and comfortable,” she said, adding her daughter also looks forward to pedaling indoors with the stationary stand.

Hrishidip Pal, a Park Forest Elementary first-grader, now can have the fun of riding, the wind on his face, despite being visually impaired. Thanks to grips at the back of his bike, his parents can guide and steady him as he pedals.

“It’s wonderful,” his mother, Parama Pal, said. “We are so happy to have this for our son.”

Salter even joined in the fun, leading a parade around the gym on one of the larger bikes as beaming parents and grandparents took photos. Before the rally, LaVallee shared stories about other children who had received bikes from Variety, and asked parents to recite a pledge to always keep the brake on when their child was getting on and off.

Srgo had some advice for the students — specifically about their parents back home.

“Make sure they have to chase you down the sidewalks,” he said. “Go like heck.” 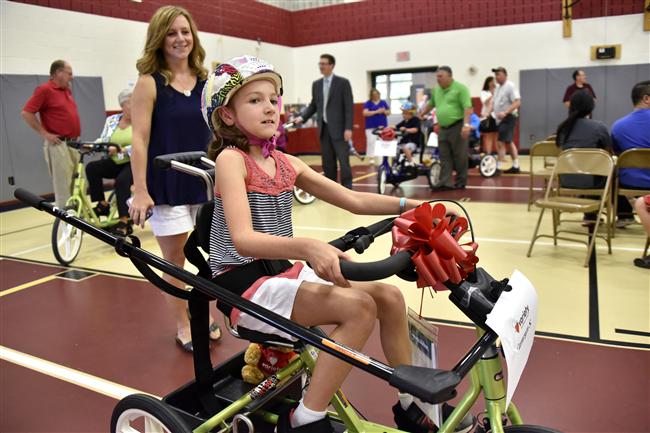 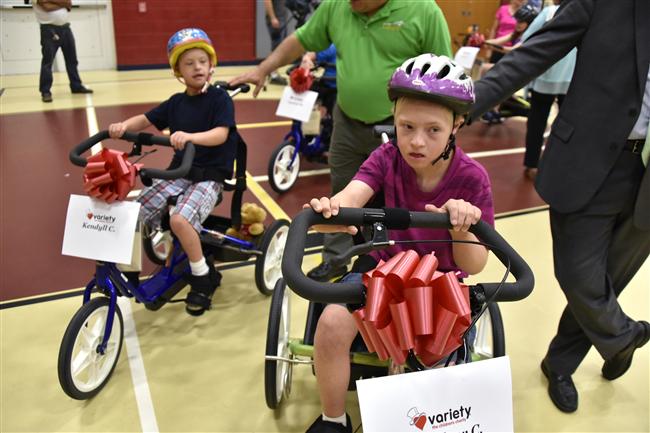 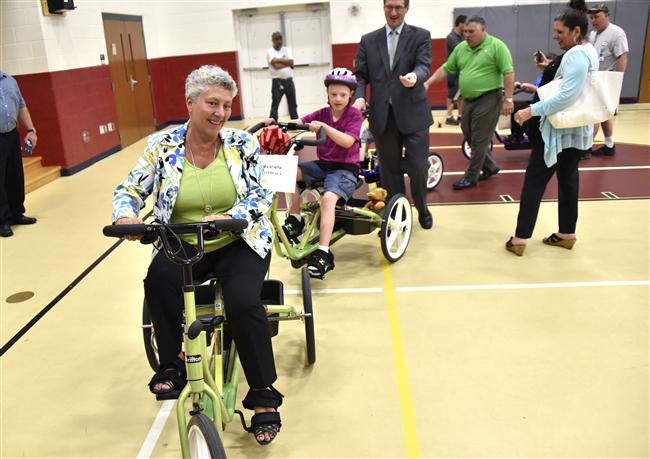 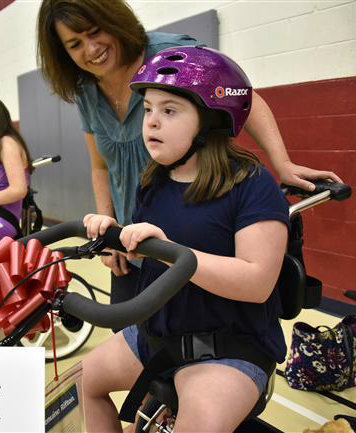 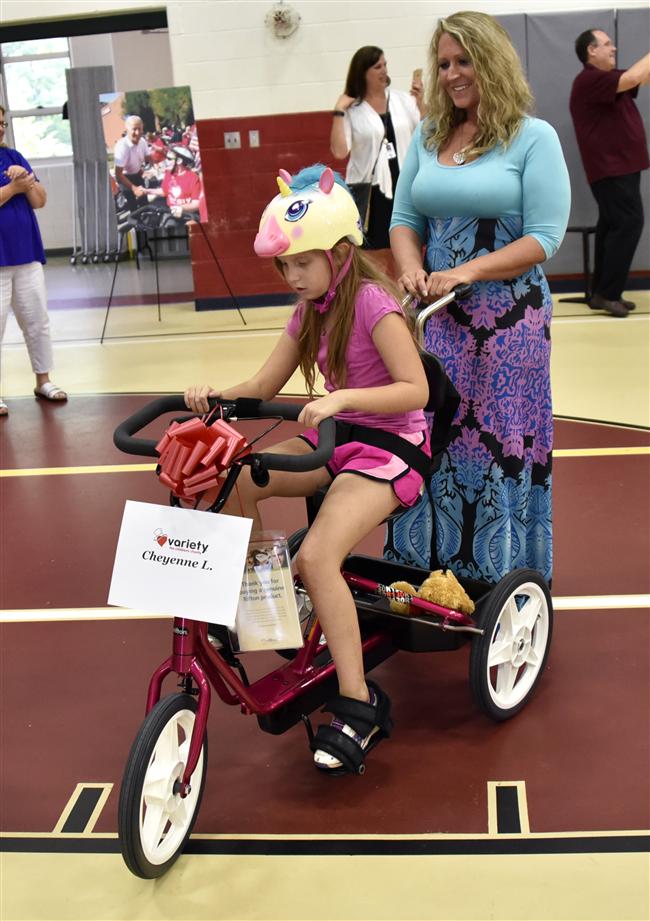 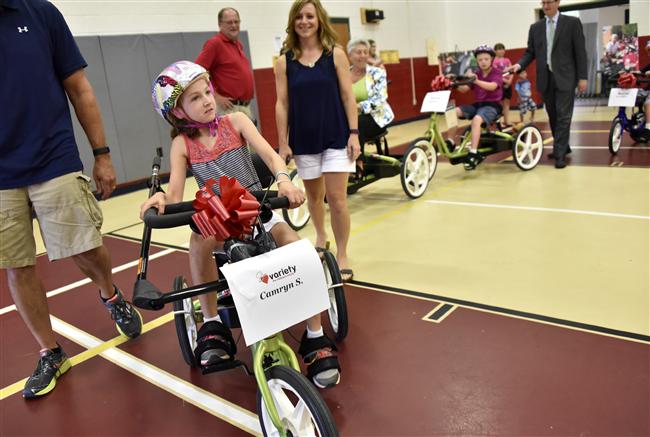 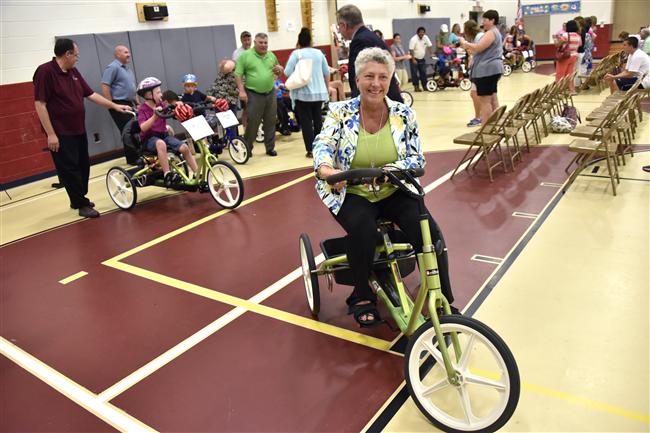 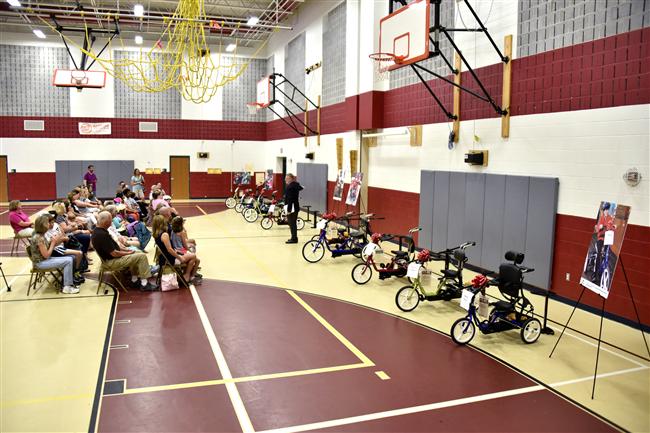 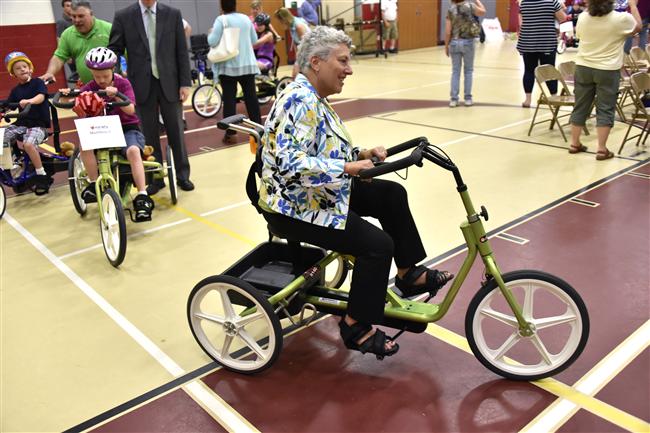 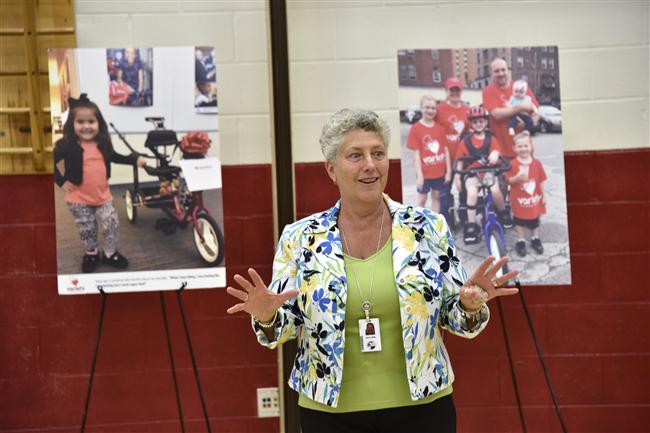